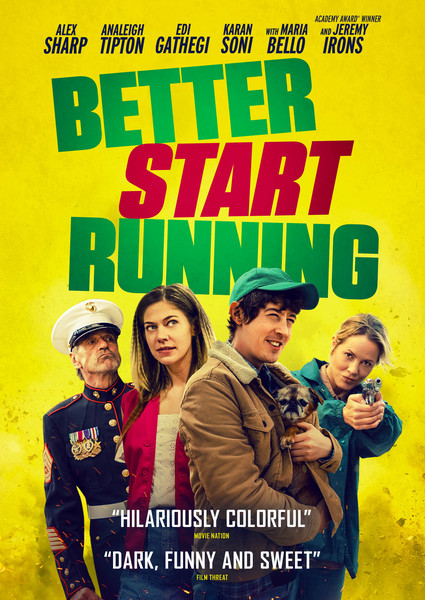 An action packed comedy about a band of misfits on the run from an FBI duo, who wants them dead or alive – preferably dead.

A star studded action comedy. An unexpected series of events turns everyday store clerk Harley (Alex Sharp – THE HUSTLE) into a wanted man and even more unexpectedly, he finds himself on the run with the girl of his dreams (Analeigh Tipton – LIKE CRAZY). FBI Agent McFadden is determined to crush him and wants to teach her rookie partner how it’s done. But while the agents pursue their culprit, our hero has loftier pursuits. He kidnaps his Vietnam vet grandfather (Jeremy Irons – THE MISSION) to reunite him with the love of his life, picks up a try-hard beatnik hitchhiker with a secret of his own, and against all common sense follows a roadside attractions map with a mysterious history. As the agents get closer and closer with every stop, this eclectic band of misfits becomes an unlikely family, because sometimes a running start – can be a better start.